Sara Kidd is rocking the vegan baking scene with her retro flare and eye-popping baking creations and recipes. She is a Food Writer for the world’s most popular vegan food mag: Vegan Food & Living UK as well as Nourish Mag AU. Her latest cookbook BAKE VEGAN STUFF, Easy Recipes for Kids (and Adults too!), is becoming wildly popular and she is set to release her next book THE VEGAN CAKE BIBLE later next year. She runs one of the most interactive vegan baking groups on Facebook with 18000+ members. This year, Sara launched a new vegan baking show called VEGAN AROUND THE WORLD and runs monthly online professional vegan baking workshops.

Sara has been featured in

What can Sara do?

Sara has developed and photographed hundreds of vegan baking recipes. She has an exceptional knowledge of vegan food science and can create a diverse range of vegan recipes ranging from cakes, cookies, pastries, pies, muffins and desserts, including knowledge of gluten-free, soy-free and sugar-free baking.

Sara writes for the biggest vegan food magazine in the world – Vegan Food and Living UK – on a monthly basis. Her two-page column is titled “Vegan Baking Hacks with Sara Kidd”, which included a special vegan baking recipe and an article relating to vegan baking advice.

She also writes for Nourish Magazine Australia. One of the most sophisticated plant-based magazines in the southern hemisphere.

Sara previously worked in the film industry for 15 years before moving into baking. She has extensive knowledge of filmmaking, presenting and acting. Her team are currently in development on a six-part vegan cooking series for lifestyle networks. Sara has previously worked with brands to create special video content with great results.

If you have had the pleasure of watching Sara present live you’re in for a treat. She is fun, witty, filled with knowledge and always looking glamorous, dressed in classic Rockabilly style. And she lets you eat everything afterwards. It’s no wonder her demonstrations and workshops are always packed.

Sara shares her wealth of vegan baking knowledge and delicious recipes in this must-have cookbook. It’s the perfect buy for those wanting to learn easy vegan baking techniques and make recipes that taste exactly like non-vegan version (if not better!). Learn the easiest egg and dairy replacements with loads of gluten free, nut free, soy free and sugar free options. It’s perfect for kids and adults too!

Sara studied with some of the most fabulous mainstream cake designers and bakers including Don’t Tell Charles – Thao Pham, Hey There Cupcake – Stevi Auble. She has studied at the Australian Patisserie Academy in Sydney and Fran Costigan’s Essential Vegan Desserts Course.  Her website shares a wealth of free vegan baking resources, videos and recipes. Living between Sydney, Australia and Auckland, New Zealand, Sara is currently in development on a 6 part television cooking series.

Want to get in contact? Sara is represented by talent agency WeAreTenzing or you can email directly hello@sarakidd.com 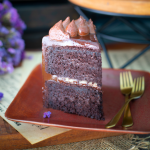 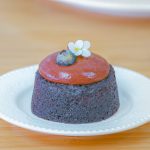